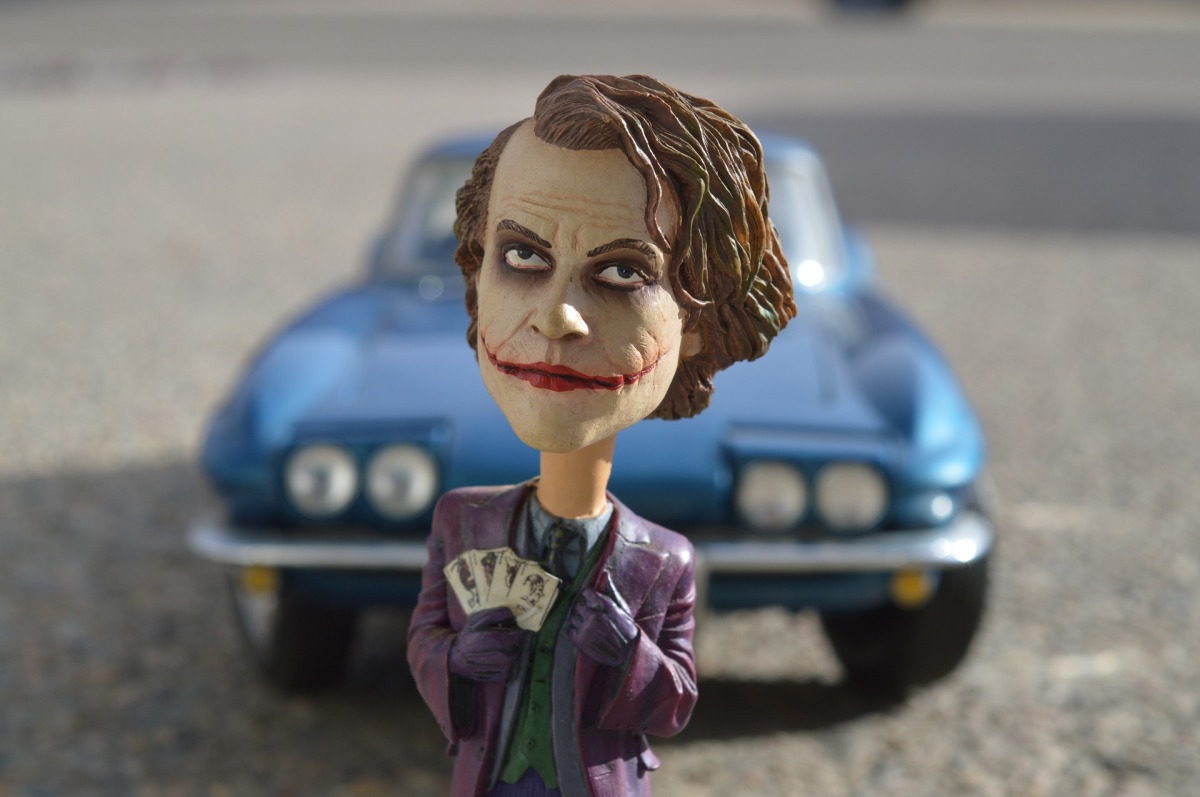 The Dark Knight (2008) was a soul shattering and nerve wrecking movie when I watched it in the cinema back then. The horror and havoc that the Joker has brought upon to Gotham city is incomprehensible and unexpectable.  I recalled having my heart hung on a string from the bank robbery scene all the way until the end where batman escaped onto a highway on his batpod. I recalled that the last scene completely broke my heart, as it conveyed the message that sometimes you just have to suck it all up and tell yourself that despite all the great good that you have done, it is just not good enough to stop the greater evil. I hated and feared the Joker very much, and felt the heavy burden on Batman, like how Gordon put it aptly “So we’ll hunt him, because he can take it.” I also vowed not to watch the movie again unless I am mentally prepared for the darkness and despair again.

Somehow I had some new realisations after I watched it again recently:

By now you would have realised that in real life, no one has the obligation to ‘take it’. Not even if you are a billionaire with everything, or the very fact that you might be the most mentally strong person in the whole city. Screw it, just because you could, there should not be such expectations that you should ‘take it because you can’. We are after all humans, and the world is not one’s responsibility. Only by releasing us from the superhero syndrome, that we make people accountable for their own behaviour and actions, we as human beings can achieve more.

(2) Joker said the truth about ‘plans’ in this world

He said ‘Nobody panics when things go “according to plan.” Even if the plan is horrifying!’ Somehow this rings true to a lot of things, jobs, plans, deadlines, and your bosses. Many of the deadlines did not make sense if upon close examinations. People think that just by virtue of adhering to the deadlines, problems and issues will go away, and that would be considered as ‘closing a job’. But the reality might be far from that.

The horrifying problems went ‘according to plan’, but the truth was about to rear its ugly heads when the world did not react appropriately to ‘the plan’. It is just like the story of people releasing catfish into a river in Sungai Perai in Malaysia, thinking that it is a good deed in Buddhism. Things went according to the plan, however the reality was these fishes were killing other flora and fauna, and human are creating nature imbalance and destroying the river (as usual). Who would have thought of this, when it was a noble ‘plan’ in the very beginning?

(3) Nowadays you have to do everything yourself

I found myself nodding wholeheartedly when the Joker says “Can’t rely on anyone these days, you gotta do everything yourself.” I have learnt it the hard way that in order to achieve the optimum results, there are a few people that you can rely upon. Sometimes it is better to get ruthless, and cut off people who are non-performing, and think of an alternative where you have to really prioritise and do the key things yourself. At times we may say that there are no-one else to do the work so we try to give ourselves wishful hopes that the non-performer may actually buck up, or moaning to ourselves saying things like ‘who else to trust if not them?’.

Well trust me, if they disappoint you once, they will not be able to miraculously change their mediocre nature overnight, and most likely than not, they will continue the damage until they fully consume you. It is like a virus. Cut the cancer off, even if it means amputating the infected limbs. It is painful, but it is for the greater good.

4) Bruce is right about ‘everyone is after something’, all men have their objectives and things that they seek

Bruce said ‘ Criminals aren’t complicated, Alfred. Just have to figure out what he’s after.’ In the movie the Joker was a maniac who did not wanted anything but the fun to see the world burn, to toy around with all the heroes and mobsters in Gotham city, and play a few mind games.

Back then I find the Joker to be completely incomprehensible because he did not want money, power, women, or any sort of validation that normal people seek. He is therefore, uninfluenced and incorruptible, ironically. But he did not want to ‘watch the world burn’. The Joker was an ingenious criminal that wanted someone to play along with him. He has a passion for mind games and riddles, and so far everyone has been predictable, except for Batman. There is an element of novelty and surprise since Batman’s identity is not revealed.

But after watching the movie, you will soon realise that there are a few opportunities where the Joker could have been killed. The only way how the Joker could be defeated, is if he was killed. Like the only way how a whimsical kid could be stopped: is not to play their games and end it there and then. So the Joker did want something, and the game he wanted to play ends when people stop engaging in his game (and killed him).

I was introduced to a little anarchy myself, approximately 500 days ago, when I was diagnosed with lupus nephritis. Back then I felt that it is unfair that I have gotten lupus eventhough my colleagues and bosses worked equally hard and went through the same levels of stress, but did not suffer from lupus. I also wondered what was going to happen to my career, my love life and my world given the fact that now things wull no longer be the same.

Three months after my diagnosis and treatment, I started to understand the anarchy that was introduced to me, was somehow beneficial to me. I realised that maybe lupus was my way out of the things that I could not change for a very long time. Maybe it has given me a second shot to live my life with better priorities (newsflash: not to focus solely on work), and to sort some of the burning issues out with lupus.

I will not attribute my change to a more fulfilling life to be solely from lupus, but lupus is definitely the main catalyst to different focus and priorities in life.

Lastly, I was very surprised that I have empathy over the Joker the second time I watched the movie. I felt exactly the same when he mentioned that people just wanted to follow their own plans. I do not condone to his terrorism, however I do agree that people may need to stop to look at the plans that they are ever diligently pursuing, if they made any sense to their overall well-being, and how those decisions impact the lives of people around them. The anarchy in life happens every now and then, and when it does, you might have to embrace it and think of the better things that comes out of the chaos. It is life after all, and it is supposed to be unpredictable, like how the Joker has correctly put it.